What is the Romeo and Juliet Series?

The Romeo and Juliet Series is a group of performances that have been staged in Greenland, Norway and the Republic of Georgia.

Based on Romeo and Juliet, the script is modified to reflect local names, history, media, towns, characters, customs and humor, and is set in the area it is being performed.  The play also combines English with the predominant language of the region (to date, this has included Kalaallisut, Danish, Norwegian and Georgian).

The original Greenlandic production was sponsored by a generous gift from the US Embassy, Denmark, the Norwegian production was self-funded and raised a substantial contribution for Botshabelo Children's Home in South Africa, and the Georgian production was funded by a grant from Greenheart Travel. While budgeting has been varied, it is possible to create this production for minimal costs. Usually, production time is three months from casting to final performance.

The script can easily be modified for your local production in almost any region. It's also ideal for first-time directors and casts as the audience knows the story-line and there is substantial material to assist you in you production. The script is freely available without copyright and performance fees. Contact Theater in Education at aquaskaya@outlook.com for more details or assistance.

The story opens with fighting on the streets of Nuuk between the Johansen's and the Kleist's. No one is killed, but these are bad times in Nuuk. Anguti (Johansen), who is in love with Orsina, is convinced by his friends Benvolio and Mercutio to go to a Kleist party at Manhattan. At this party, he meets Juliette (Kleist), kisses her, and immediately falls in love with her. Anguti later finds out that she’s a Kleist. He decides he loves her anyway and they confess their love for each other on a balcony at the Hans Egede Hotel, where they agree to secretly marry the next day. Friar Laurence, a friend of Anguti, disagrees with such young love but marries them anyway in the hope the marriage will bring peace to Nuuk. Later that day, Tybalt (Kleist), angry from Anguti crashing the Kleist' party at Manhattan, finds Mercutio and Anguti on the streets of Nuuk. He challenges them to a fight, which Anguti tries to stop as he's now a relative of Tybalt. Mercutio is killed, and in anger, Anguti kills Tybalt. The Mayor of Nuuk sends Anguti into exile to Sisimiut. Juliette's nurse tells Juliette that Anguti is exiled, and that she must marry Paris. Distressed, Juliette goes to Friar Laurence, who tells her to drink a potion that will make her appear dead. He'll send a letter to Anguti telling him of the plan. Afraid, Juliette drinks the potion. The Kleist's think their daughter is dead and bury her. The letter never reaches Anguti. Thinking Juliette is dead, Anguti buys poison and comes to Nuuk. Paris visits Juliette's grave, where he hides when Anguti approaches. Thinking Anguti has come to disturb the Kleist' family grave, he challenges Anguti to a duel. Anguti kills Paris. Anguti kisses Juliette one last time, drinks the poison and dies. Juliette wakes up and realizes what has happened. She tries to drink the same poison but there's none left. She kisses Anguti one last time and stabs herself with Anguti dagger. The Johansen' and the Kleist' families find their dead children and agree to end their fighting. Have no fear. There is a surprise ending.
No comments: 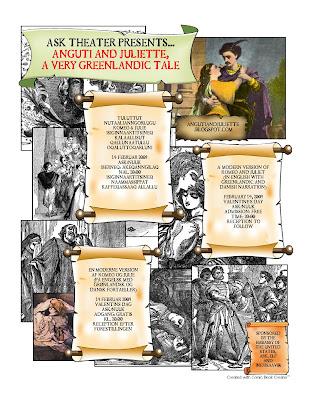 The making of Anguti and Juliet